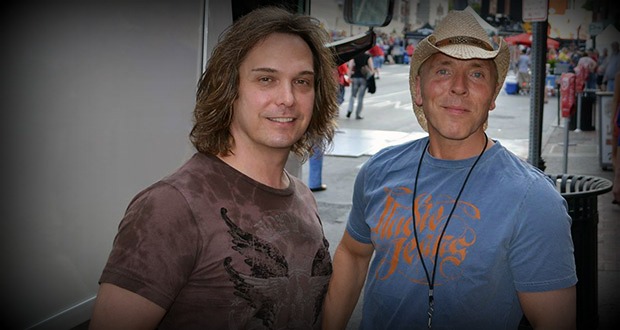 Miqael Persson aka Hicks (from Sweden), has just returned from a successful 2 weeks in Nashville, Tennessee where he represented Sweden at the International Global Show sponsored by the CMA and Aristo Media, along with various acts from around the world. This event we beamed live around the world via the Internet and audio streams to over 10 stations in the USA, Europe, and Australia

He then was asked to appear at two of CMR Nashville’s International Shows on Broadway at the Whiskey Bent and The Bridgestone Arena Glass Tower, if this wasn’t enough he was invited to be part of the CMA Fest Autograph signings at the Digital Rodeo booth with thousands of fans walking around in the brand new Music City Venue one of the biggest exhibition venues in the world. More to follow when asked to appear as a special guest at ‘A Night For Heroes’ a fund raiser for returning soldiers.

Media coverage gave Hicks many radio and TV interviews that will be aired over the next few weeks and live on the day.

Miqael is also an accomplished songwriter with most of his live material being written by himself and other co-writers. Whilst in Nashville he was able to co-write top songwriters Anthony Smith and Dallas Rogers. He met with his USA publisher and learned that a song he wrote ‘Cuts Like A Diamond’ on his last USA visit was picked up by the Little River Band. Not only did they record it, but used the title of their new album to be released in August when they start a nationwide tour of the USA to promote it. Other artists have recorded his songs this year and these should be released later this year in both the USA, UK, and Sweden.

He took the last day off to socialize with Lee Williams, and met up and two of his song writing idols Earl Bud Lee and Jeffrey Steele(pictured above) at a Time Jumpers gig along with Vince Gill. Both Earl and Jeffrey want to write with Miqael on his return.

Hicks is playing in Nashville during the CMA Music Festival

Brad Paisley – No I in Beer